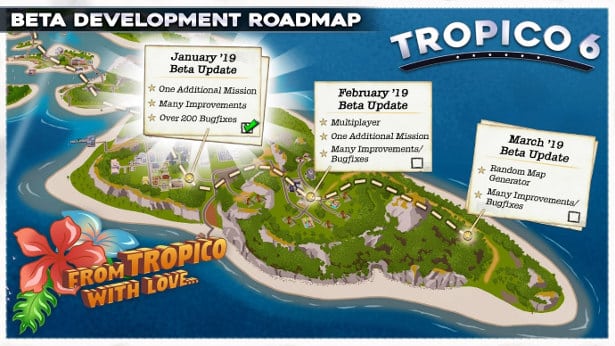 Tropico 6 closed beta roadmap releases new features for Windows, as well as in Linux and Mac game. Kalypso Media and developer Limbic Entertainment release a new update. Since these features are now available the Tropico 6 closed beta. Releasing to all who pre-order the game on Steam, Humble Store or the Kalypso Shop.


Since Kalypso Media is doing a fine job keeping fans up to date with Tropico 6 progress. There is also a beta roadmap detailing all the upcoming features before launch on March 29th.

The roadmap also highlights upcoming content coming for the beta. This includes multiplayer, a random map generator and an additional campaign mission.

Since the appearance of Tropico 6 releasing on Linux, Mac and Windows. The games is only available on Windows for the closed Beta. And yes, closed beta allows fans and the community to shape development. But, since Tropico 6 you can play via Proton. There is light for Linux players to take part in a bigget and better game.

Tropico 6 is available to pre-order now. Available on Steam and Humble Store with a 10% discount. While the Kalypso Shop releases Beta access with 12% discount, giving you access to standard version. With instant access to the closed beta. While the special El Prez Edition includes two tourist outfits for your Presidente. With a flamingo pond for your customizable palace, a digital soundtrack, digital calendar and instant beta access.