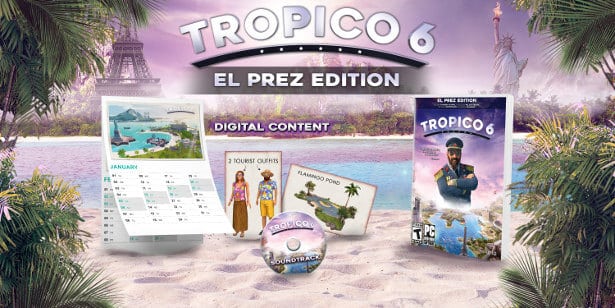 Tropico 6 strategy simulation games official release date for Linux, Mac and Windows. Which is coming later this month. Thanks to Kalypso Media. The award winning publisher of strategy and simulation games. Along with the development efforts of Limbic Entertainment. The games available for pre-order on Steam and Humble Store. Which also has day-one support.


We also have Tropico 6 release details for the ‘El Prez Edition’. This is a boxed retail edition of Tropico 6. Releasing digitally March 29th on Linux, Mac and Windows PC. Retail on April 2nd. While the Beta supports Windows. The games also playable via Proton. So check out the Free Beta.

Tropico 6 is the latest edition. Hence the acclaimed Tropico series. Which also sees the return of beloved leader. Or reckless tyrant, El Presidente. Along with his faithful adviser, Penultimo.

The ‘El Prez Edition’ PC retail boxed version of Tropico 6. Also available for pre-order. Which comes with a wealth of bonus goodies. Spicing up your Tropican vacation. Since this includes two tourist outfits for your Presidente. Also an exclusive flamingo pond palace design. A digital soundtrack of foot tapping Tropican beats. Plus a digital calendar to mark off the days until election day.
So basically anything a budding Dictator needs. While establishing a journey to greatness.

Tropico 6 is going to launch on Linux, Mac and Windows PC. The digital release date is March 29th. Priced at $49.99 USD, plus a 10% pre-order discount. Available on Steam and Humble Store. With full day-one support. Not bad for an Unreal Engine 4 game.
Or April 2nd for boxed retail edition. With console versions will follow in summer 2019. Coming to PlayStation 4 and Xbox One.