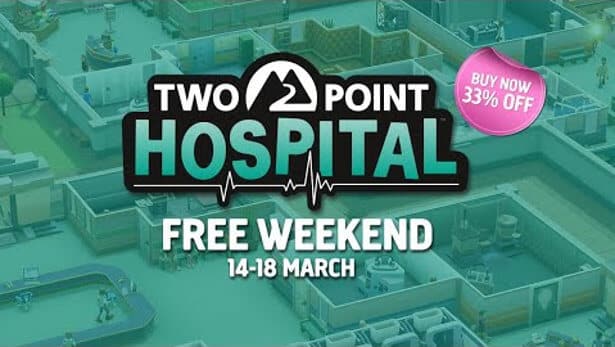 To celebrate, Two Point Studios are also teaming up with SEGA studios. As well as Amplitude, Sports Interactive and Creative Assembly. So they can bring exciting new items to the game. Although… mysterious cases of Headcrabbedness. Which also seem to be popping up all over Two Point County.

So until 10am PDT, 21 March 2019. A host of SEGA games will be on sale at up to 90% off. Available through the official SEGA Steam Sale page. And also Two Point Hospital will be 33% off throughout. So players who want to purchase the game. Can also continue playing after the free weekend.

At 8am PDT, shortly before the free weekend finishes on 18 March 2019. Two Point Hospital‘s second DLC, Pebberley Island. Will also launch on Steam. Since this adds three more hospitals. All with different gameplay modes. Even more unusual illnesses and tropical themed items. While carving a mythical missing spring of immortality. All in a dreamy tropical island.

For all things Two Point Hospital. Sign up for the Hospital Pass at twopointhospital.com. Also home of the legendary Golden Toilet in game.
So now, signup bonus is upgraded to a full Golden Bathroom Suite. While adding the Golden Sink. And Golden hand dryer. So you can make your hospitals extra fancy.

Reaching the title of best healthcare provider in Two Point Hospital is not easy. As each hospital brings its own array of challenges. Players will have to build their hospitals. Cure all sorts of unusual illnesses in this simulation. Ranging from Jest Infection to Cubism. While improving services via staff training. As well as research and upgrades.