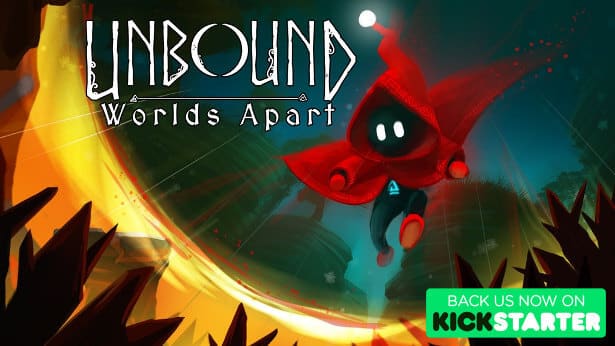 Unbound: Worlds Apart a unique platformer games doing well on Kickstarter for Linux, Mac and Windows PC. Thanks to Alien Pixel Studios. The crowdfunding campaign is funded. Currently at $25,055 USD passing that $250,000 USD. There is also a free public demo (Windows PC). There is also apparently a Linux demo coming as well.


Unbound: Worlds Apart is a puzzle adventure platformer. One that also invites players to take on the role of Soli. While conjuring magic portals, travelling between different realities. Doing so in order to learn more about the catastrophe. Since it ravaged his world.
Inside certain portals things are not always the same. The laws of physics and abilities of the character change. While opening up new and inventive ways to progress.

The Unbound: Worlds Apart public demo (Windows PC) gives a glimpse. So you can explore this stunning hand crafted world. Venturing into a dark fairytale that begs to for more exploration.

Olga Ciob, Art Director on Unbound, said: “Unbound is a game in which you not only explore a beautiful world. And solve environmental puzzles. But also have a number of different mechanics. Changeable behaviours that you’ll need to learn, adapt to. Then use to progress through the story. You’ll always have an alternative world available to you by opening a portal. But there’s an element of risk and reward. As you never know what will be lurking on the other side.”

Game Designer Sergiu Craitoiu added: “In June 2018, we quit our jobs and began developing Unbound full time. Because the game is shaping up nicely and the project grew up to be more than just a ‘spare time gig’, we found ourselves in need of funds to continue the development without having to compromise on the quality or the content of our vision. Bringing Unbound to Kickstarter will not only give us a possibility to finance the development of the game, but it will also keep us on our toes and ensure we are committed to our community. We see it as a promise to our players to deliver the best game we possibly can next year.”

Interested players can Wishlist the game on Steam, join the Discord server, and follow Alien Pixel Studios on Twitter. But also make sure to check out the Kickstarter. The games coming to Linux, Mac and Windows in May 2020.

It Is Nice When It Snows puzzles Kickstarter