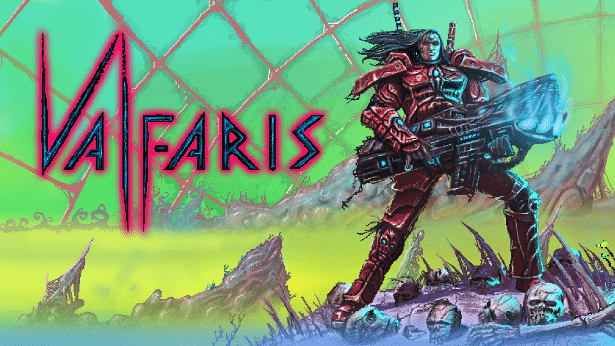 Valfaris has a new Demo available on Windows, but have a Linux support update. Indie game publisher Digital Uppercut has released a limited time demo for Steel Mantis’ for the upcoming heavy metal 2D action-platformer. Available now on Steam and playable until December 31st, playable for Linux gamers using Proton.

Linux players can get a taste of the colourful, cathartic run ‘n’ gun chaos Steel Mantis has cooked up for them in 2019. Once the clock hits midnight PT on New Year’s Eve, the Valfaris demo will be deleted. So players will have to wait until 2019 to get a full look at the brutal sci-fi combat.

The demo and Steam page are available in the following languages: EU French, EU Spanish, Italian, German, Polish, Turkish, Russian, Brazilian Portuguese, Traditional Chinese, Mandarin, Japanese.
Since I have personally tested the Demo via Steam Play using Proton, it does work very well. But do pay attention the “Controls” section. 🙂

“Plans to release on Linux are currently being discussed. I shall keep you posted.”

Since this is the latest email update from Steel Mantis, Linux support is at least “being discussed.” Due note, that the game engine being used for development is Unity 3D. Which is obvious when you play the new Demo.
Also, this is indeed an action packed debut for what is yet to come. Check it out. Be wary though, enemies do respawn, so don’t sit in one place for to long.

Developed by the team who made Slain: Back from Hell. Valfaris is an epic side-scrolling shooter hearkening back to the genre’s golden era. The deranged lovechild of Contra, Heavy Metal magazine and Aliens.
Since Valfaris takes place aboard the titular once utopic citadel. Now consumed by an ever-growing darkness that infests the former paradise with all manner of demonic beasts. Players assume the role of proud son and Warrior Lord Therion. Revisiting his ancestral home to eradicate the plague of monsters. Since these beasts are trying to take Valfaris from a divine kingdom into an unholy cesspool.

The pre-alpha demo lets players sample the game’s opening stage as Therion crash lands on Valfaris. Playable either with keyboard or controller (apparently). Confronting all manner of grisly and monstrous enemies. Players must quickly get to grips with Therion’s arsenal of weapons. While he shoots, slices, and deflects the many hazards of this ruined bastion.
Althrough this is the initial stage, players will get a feel for Valfaris’ psychedelic pixel-art visuals. As well as the vicious combat and smattering of secrets. Not to mention the plethora of beefy mini-bosses and bosses who inhabit the game’s heavy metal space universe.

“Valfaris is everything I wanted from a video game since I was a teenager,” said Digerati Director Nick Alfieri. “It’s got ghastly aliens, gruesome combat, a killer soundtrack, and it’s just a blast to play!”

The full game is due in 2019 on Steam, PlayStation 4, Xbox One and Nintendo Switch. Expanding upon this premise even further yet. Complete with an expansive arsenal of weapons that players can level up as Therion dives deeper into the gnarled heart of Valfaris. Hopefully we will have a solid update for Linux support.