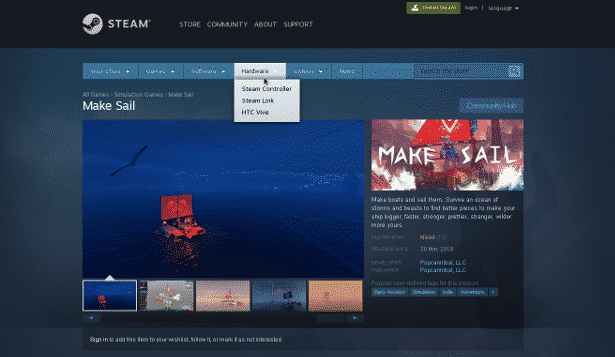 Valve hides the Linux and SteamOS, Steam Machines on the website. Since we were paroozing the site recently, it’s clear these listings have indeed changed.

Valve started introducing hardware partners for Steam Machines back in 2013. While announcing a protype Steam Machines in September. Then later in the year hundreds of such machines were in the hands of testers. So we then heard about multiple Steam machines, from Alienware, Gigabyte and Zotac in 2014.

Valve and the partners delayed the official launch to 2015. Since the controller designs being unsatisfactory. Which they were. So while vendors were readying hardware. Some gaming friendly systems were shipping with Windows 8.1 trying to turn a profit.
November 2015 becoming the official launch of Steam Machines. Allowing users in the mainstream to pre-order. While missing the initial hype for vendors to acquire sales.

Since this does not mean that the Steam Machine pages are deleted. Well at least not yet. You can still Search for ‘Steam Machine’. Since results show the Alienware, Materiel.net and Scan 3XS ST Steam Machines. Also the category page still exists too.

So the lack of hardware sales could be due to the maturing SteamOS. Which in turn should give improved hardware sales for Valve. While including a significant boost for Linux gaming. It is a challenge to know the root cause. Since Linux gamers with experience could load up a copy of Ubuntu with the same or better results. Plus one major complaint comes from the Steam library not being geared to Linux only games.
Mind you, repeat delays, the price and performance of the machines could be part of it. Hence the dedicated living room hardware novelty wearing off.