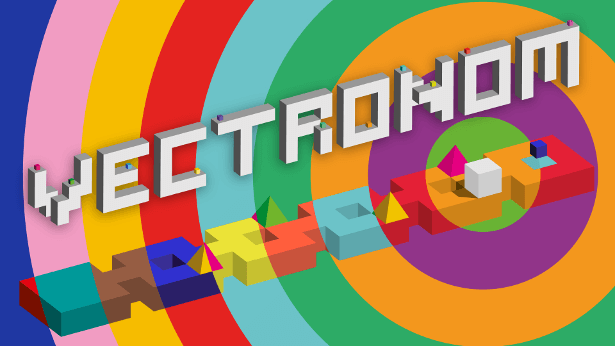 Vectronom a rhythm based 3D platformer for Mac and Windows PC, the games developer is working on Linux support. Thanks to the direct feedback from developer Ludopium. Since the studio just released the game on Steam. With a stellar review score of 97% Positive.

Vectronom will have you experience waves of color. While grooving to the pulsing geometric path. Which also changes with the beat of the rhythm. The game released May 29th. With the help of publisher and co-producer ARTE. Alongside indie game studio Ludopium. So we reached for details on Linux support.

In Vectronom players synchronize the movements of a cube to a frenetic beat. Doing so across an ever changing geometric environment. Always pulsing with music. The colourful madness of memorizing rhythmic riddles and challenges. A three dimensional thinking where difficulty increases. And will bring the action, doing so as quickly as your fingers move. Somewhat similar to the tasks of Upside-Down Dimensions.

“At this time we can’t confirm a native Linux port in the future. But we have tested the game successfully under Proton 4.2-5 and Steam Play. We are currently looking into how to enable the solution for all Linux users.
Regarding your question on the game engine, it’s made with Unity.”

So there you have it. The plan is afoot and Linux is in consideration for Vectronom. There is also a Steam Discussion page, so you can share your Tux Love. But also make sure to Wishlist on Steam.
Hopefully with enough support we can sway Ludopium in a native build. Since this is a Unity 3D game after all.

With the option of hooking up alternate controllers to your computer. Such as MIDI instruments or dance pads. Vectronom might even get you moving more than your fingers. Players on both platforms can accept the challenge on their own. Or alongside friends with the local, drop-in/drop-out multiplayer mode.

Post launch Ludopium also plans to include a level editor. Coming to both versions. Allowing players to create their own insane levels. While using curated beats. Then challenge the world with never before seen rhythmic puzzler.

Vectronom rhythm based 3d platformer on Steam. Supporting only Mac and Windows PC. Priced at $9.99 USD / €9.99 / £8.99. With hopes of more direct Linux support going forward. Hopefully we don’t have to settle for Proton. Since this is a Unity 3D game.

Vectronom is localised into French, English and German. Also Italian, Spanish, Dutch and Portuguese.
For more information on the game, please visit the official website and follow the dev team on Twitter and Discord.

Yooka-Laylee gets a new trailer showing off extra arcade games