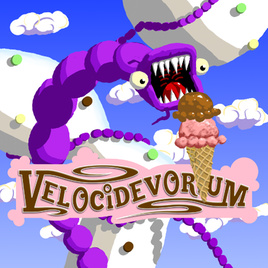 #ReallySlick is back with another majestic title, where players take control of a fast-growing serpent that feasts on everything in it’s path (except explosive things), for Linux and Windows PC. But make sure not to run into sinuous tail. This is after all a #game about eating, from the creators of #Retrobooster.

Gameplay is all about fast eating, while others are about strategic eating. The name Velocidevorium is a pseudo-Latin for “a place of swift devouring.”

The level-up system is different in this game. Rather then generating a level where players are tossed in, Velocidevorium‘s levels up by changing every frame, the surface constantly morphs.

Velocidevorium‘s art style is not final yet, the simplicity of the minimalist blobs looks great in gameplay.
Developer Terry Welsh* envisions a more detailed world, where the serpent is composed of sumptuous papercraft body segments. This will also mean listening to player feedback for a suitable art style in the game.

Velocidevorium is currently in alpha state right now. So features, gameplay and game modes are also in development. Local multiplayer is on the drawing board but not yet implemented. There is much to be done. So your vote and feedback on the Greenlight page will help shape state of actual gameplay. And help create a better chance of Velocidevorium making a debut on Steam Early Access.

* The developer is not responsible for collywobbles or crapulence stemming from Velocidevorium play sessions, either in the form of induced eating disorders or vestibular discombobulation.

Inkulinati is a new ink-based strategy