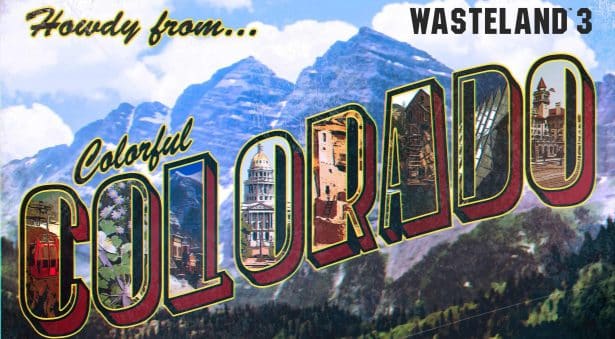 Wasteland 3 the games new trailer revealed for Linux, Mac and Windows PC. Thanks to developer inXile Entertainment. Who just revealed the new trailer at E3 2019.

Since the success of the Fig campaign ending November 3rd, 2016. Now Wasteland 3 has a new trailer. Developer inXile Entertainment was bought by Microsoft. So it’s not a surprise that we see a new trailer at Microsoft’s E3 presentation.
While Wasteland 2 takes place in a more dry and desolate setting. Wasteland 3 is heading to a new state. The trailer shows a post apocalyptic Wasteland in Colorado. We also see some of the characters and enemies we get to meet.

Colorado is significantly more snowy than previous areas of the game. We also see some huge robots and hidden threats. Since the previous titles have a focus on Arizona adventures. While using the Texas Desert Rangers.
Also the announcement trailer for Wasteland 3 is a desert ranger hat being swept away in the snow. Now we have a drunken man show us our first view of this new state. Check out the pre-Alpha first look below.

Since we don’t get into the plot. The new release should follow its predecessors. Allowing the player to make choices. Building your character and exploring branching narrative paths. We also see glimpses of the grid-based combat from other Wasteland titles. Confirming the combat will retain that same structure.

The Wasteland 3 Fig crowdfunding campaign reached over $3.1 million. Double that of The Bard’s Tale IV. Both in funding and investment reservations from 17,707 fans. Giving support for the sequel to the critically acclaimed game of the year Wasteland 2. The campaign generated $2.25M in investment interest. With SEC qualification of Fig Publishing, Inc.’s offering statement.
Fans who registered their investment interest will be able to buy their Wasteland 3 Fig Game Shares. Fig Publishing, Inc. will soon reach out to investors to complete their investments online at fig.co. Backers should review the offering circular for Fig Game Shares. WL3 that will be available on Fig’s website and the SEC’s website. So check out the Fig update.

Wasteland 3 backer Alpha will arrive August, 2019 via Steam. Also for those who pledged in the First Access and higher tiers. Early Access (referred to as Beta) will be arriving in late Fall, 2019. While the launch target for the full game release is Spring 2020. Available on Linux, Mac and Windows PC.

So if you who haven’t backed the game yet. And you’re waiting patiently. inXile will be closing CrowdOx to new orders on June 30th. At which time platform selection will be under way. Check out the CrowdOx page to manage your pledge.