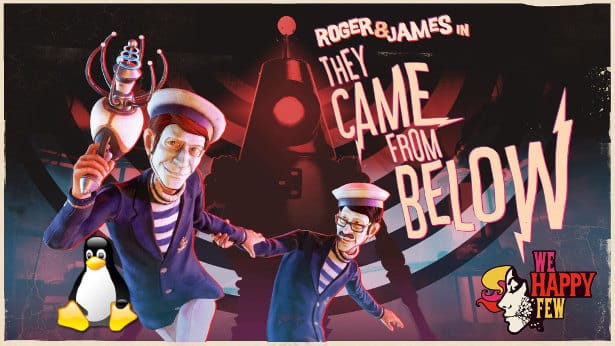 We Happy Few patch 1.7, the new Arcade Mode and the games Linux support. We reached out to Compulsion Games. Hoping to get some further details on Linux support. Along with new gameplay changes.

We Happy Few patch 1.7 is now live. This also includes the new Arcade Mode. Available back on March 25th. Plus the more recent PAX announced DLC. “They Came from Below” is the new hand crafted story. Which is coming this week, April 4th. But with all of this new content. What is happening with Linux support?

“We still don’t have official timing on a linux build. But it’s hopefully not too far away.

We’ve had it working internally for a while. But we’ve been focused on We Happy Few 1.7. We’re putting the linux build through some final QA now. And we’ll likely push it to a preview branch on Steam first. To get early user feedback before we can talk more widely about release.”

So this is some good news for We Happy Few. The developer at least has a final build. Which is coming to Beta branch on Steam. You can also see the changes on SteamDB. So things are indeed looking up.
Since Compulsion Games did not give a time frame. I’m hoping this comes fairly soon. Either this week or next. Given a smooth release for the new DLC.

During the game’s Kickstarter campaign in 2015. The development team promised additional modes. We Happy Few now has the new Arcade Mode.

Arcade Mode is a free game update for We Happy Few. This contains three new modes. This also showcases a different part of the game. So you can experience: Survival, Night’s Watch and Sandbox.

So it looks like we are closer to We Happy Few support. Since the Linux build is far closer to release. Which means we should have good news soon. Priced at $59.99 USD. Both on Steam and Humble Store.

We Happy Few may release in the Beta Branch