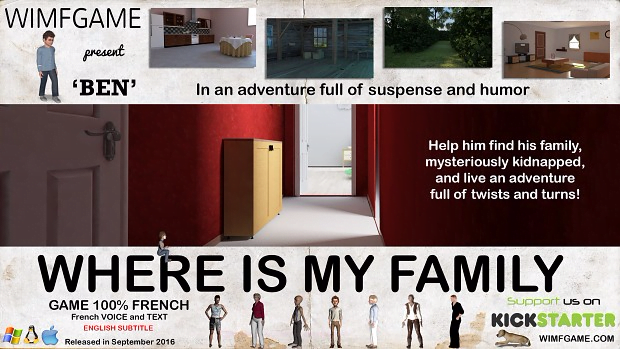 Where’s My Family a #pointandclick adventure #game scheduled for September 2016 on Linux, Mac and Windows PC. Having #launched the crowdfunding campaign on Kickstarter to improve and finalize the game.

Ben, 12 years old, comes home after school. Because of his poor grades in school, his mom locks him in his room for the rest of the day.
A few hours later, when everything is quiet in the house, an intruder breaks in and kidnaps his mother and his little brother.
Locked in his room, Ben is unable to help them.

What to do? Call the police? Call his dad?

Adventurous and full of courage, he starts to investigate by himself and plans to find out the cause of their kidnapping.

The demo does not necessarily reflect the final quality of the game. It is meant to show off the gameplay. Which in turn is update every day in order to provide an improved final version.

To avoid spoilers and not break the suspense, the demo only contains the 4 first rooms (the final release will have more than 38 rooms).
And English subtitles may contain translation errors. Fixed in the full version.

The scenario whole offers many secrets and keeps the player on their toes. This is a title that will indeed take hours to discover the story of Ben, little clumsy kid trying to find his missing family.

Where’s My Family is looking for your support on Kickstarter and expected to be released in September of 2016 for Linux, Mac and Windows PC.