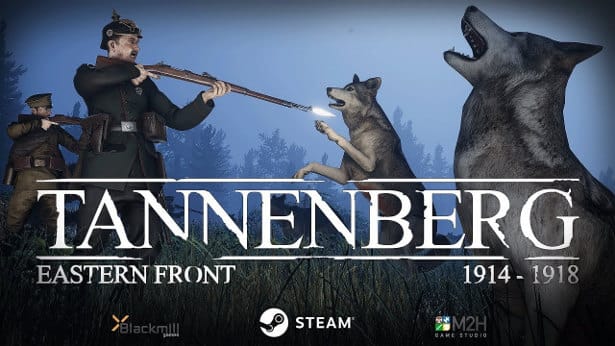 Wolf Truce Event and Tannenberg sale in Linux, Mac, Windows games. Thanks to Blackmill Games and M2H. Who highlight a special historical event. Hopefully you bought the game. That 60% s​ale is a great deal on Steam and Humble Store.


Ravenous wolves are on the hunt. Since this is a limited time historical event for ​Tannenberg. In the same vein as the Christmas Truce events. Which were held in ​Verdun in the past. The Wolf Truce will offer a new experience. But it’s only available to players until April 21st.

The Wolf Truce is a limited time special event. Which is running from April 12th until April 21st. So to take part in the event no extra steps have to be taken. Players just need to play ​Tannenberg as usual. Doing so any battle over the weekend. And every battle on Winter maps. At least while the event is live.
There will be a pack of wolves (Wolf Truce) on the battlefield. Forced by hunger and the chaos of the war seeking human prey. Players on both teams will have to decide amongst themselves. Whether or not to call a truce to deal with the new threat. While the battle clock will continue ticking. And should one team be in a weaker position. They may also try and take advantage of the unexpected attack.

Players will be able to earn a special medal if they and every other player can survive a wolf attack without attacking anyone on the opposing team, and ​Tannenberg will be on sale with a 60% discount on April Saturday 13th – the perfect opportunity for new players to grab the game and join the event!

Since the Wolf Truce event is based on historical records. Hungry wolves attacking people was a real threat. Taking place in many areas of Russia during the war. Since there are newspaper reports of soldiers from different sides. All calling a temporary ceasefire to deal with wolf attacks. Also a Russian book translated as ​The History of Russia in Faces: Book Two.
Since this explains a ceasefire to exterminate wolves. While the ​New York Times​ went into more detail. An extraordinary truce in 1917 between German and Russian forces (Wolf Truce).

In Tannenberg you can also this remarkable event. Where players can choose to hold a truce or fight the wolves alone.

Players can buy ​Tannenberg​ on sale for 60% off. Which ends today. But the the Wolf Truce runs until April 21st. Which is playable on Linux, Mac and Windows. Check out the remaining hours on Steam and Humble Store.