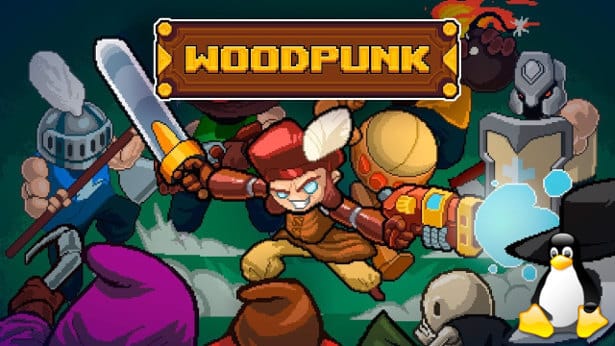 Woodpunk bullet hell action is now available on Linux, as well as in Windows games. Thanks to developer Meteorbyte Studios. Who also messaged on Twitter with good news. You can check it out via Steam and Humble Store.

Woodpunk is a charming but challenging roguelike shooter. Created in the light of a retro pixel art style. The game also puts the player into the shoes of a medieval inventor. Since he is battling hordes of enemies in a parallel Woodpunk universe.

While facing them alone. Or with the help of a friend in local coop. Aquinas has a vast arsenal of weapons at his disposal. So like the levels and surroundings in Woodpunk. These weapons are also procedurally generated. Available from unlocked parts. All adding up to over 1400 different weapon combo’s.

While the game supplies players with new weapons. These procedurally generated weapon combo’s release after each stage. So this new mechanic added last month in Woodpunk. Also lets players keep their weapon. So you can easily start in the next stage.
But the feature comes at a cost. Since this keeps the game’s balance. So the weapon degrades over time. This requires the player to either repair them. Or simply have their robot Theo create a brand new weapon.

The system also maintains the game’s standout feature. Allowing for hundreds of different weapon combo’s in play. Since this gives players the option to focus on single weapon choices.

The gameplay is full of harsh, relentless action. Also requiring strong reflexes. Plus a fair amount of battle strategy. Check out the trailer below.

Don’t blame me if you die a lot. Just hold on to your wits.

Woodpunk bullet hell is the first game release. Thanks to Spanish development team Meteorbyte Studios. Which also follows the game’s Windows PC release.
So we finally have Linux support on Steam. And the games also available on Humble Store. Priced at $14.99 USD.