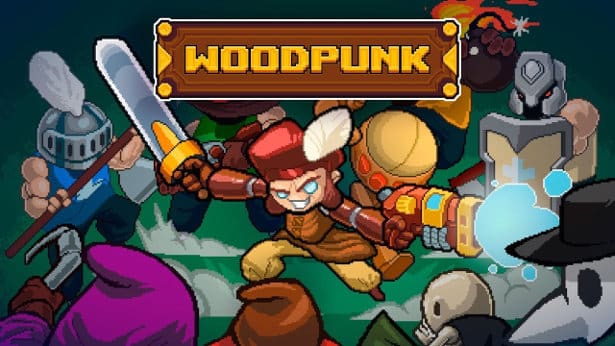 Woodpunk is a challenging roguelike shooter for Windows on Steam, but also coming to Linux and Mac. Since the retro pixel art style game is available now on Steam. We reached out to developer Meteorbyte Studios for details on Linux support.

“Woodpunk was developed largely in Unity. With many of the engine’s features replaced by our own code.

The game is now fully playable with DirectX (Windows). And we are currently handling the issues with OpenGL for the Mac and Linux versions. I’d say the game should be available in Linux sometime before Christmas.”

There you have it, confirmation and the surprise of Unity 3D. No exact release date is available. But fingers crossed we will have that native build in no time.

So Woodpunk puts the player in the shoes of medieval inventor Aquinas. Who is facing hordes of quirky enemies. While in the games parallel Woodpunk universe.
Since you can face them alone. Or with the help of a friend in local coop. Aquinas has a vast arsenal of weapons at his disposal. Like the levels and surroundings. These weapons are also procedurally generated from unlocked parts. This also adds up to over 1400 different weapon combinations.

Therefore, to support him in the action. Aquinas enlists the help of his trusty robot Theo. Who not only supplies him with new swords and machine guns. But also has some special abilities. Such as setting up a wall for cover. Or going into turret mode. Since this eases the pressure from the attacking enemy masses. Theo is control is actually AI. But can also be taken over by a friend in the game’s local coop mode.

The gameplay is full of harsh, relentless action. Requiring strong reflexes and a fair amount of battle strategy.

Woodpunk is the first game of Spanish development team Meteorbyte Studios on Windows. Available on Steam $19.99 USd with a 10% discount until November 29th, but not over priced. Also coming to Linux and Mac, soon.