The Yogscast Jingle Jam 2017 is back for Linux, Mac and Windows. While 100% of the proceeds go to charity. Therefore you give support to a great list of causes. And the humble team gives you new games all month, right through Christmas. Which is not a bad. deal. Also, I’ve been waiting patiently to see how much Linux shows up in the bundle of games.

So you can pay $5 or more to get a shoutout on the Yogscast stream. This also includes Team Fortress 2 badges. So Mandrew’s Munificent Mug and Israphel’s Eleemosynary Expression. And also receive a coupon for 10% off Humble Monthly for new subscribers. Not too shabby.

Pay $35 or more to also receive RUST, Q.U.B.E. Director’s Cut, Garry’s Mod, Gunpoint, Defend Your Life: TD. Since these games all support Linux. There are others, such as Warhammer: Vermintide; Dwarf Helmet and Warhammer: Vermintide 2 Beta. I know these may not necessarily have direct Linux support. So they may be playable via Wine. Or just give them away. 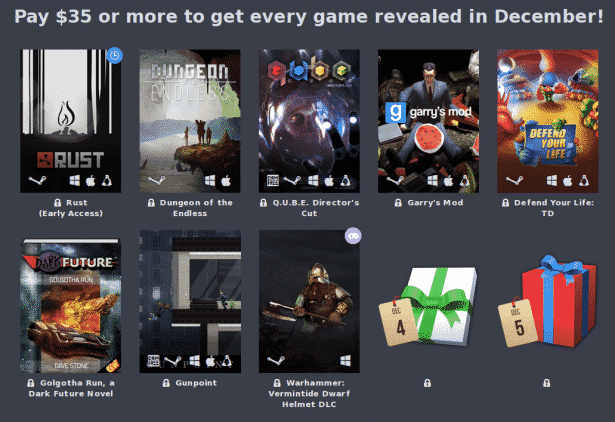 Also, depending on the games, you can redeem everything on Steam. While some are avialable DRM-Free. All of the games in this bundle are available on Steam for Windows. And some for Linux and Mac, which will be something worth checking. Since some Linux community members are 100% eager for total native support. Which would be great but will likely not happen.

Yogscast Jingle Jam 2017 has a top contribution of $5000 USD. However it’s not expected. So choose where the money goes. Either between seven charities: Wallace & Gromit’s Grand Appeal, Mental Health Foundation, Cancer Research UK, Whale and Dolphin Conservation, Special Effect, Save the Children (all via the Paypal Giving Fund), and ILGA (via the Tides Foundation).