Gauntlet reboot keeps you playing longer on PC and Linux 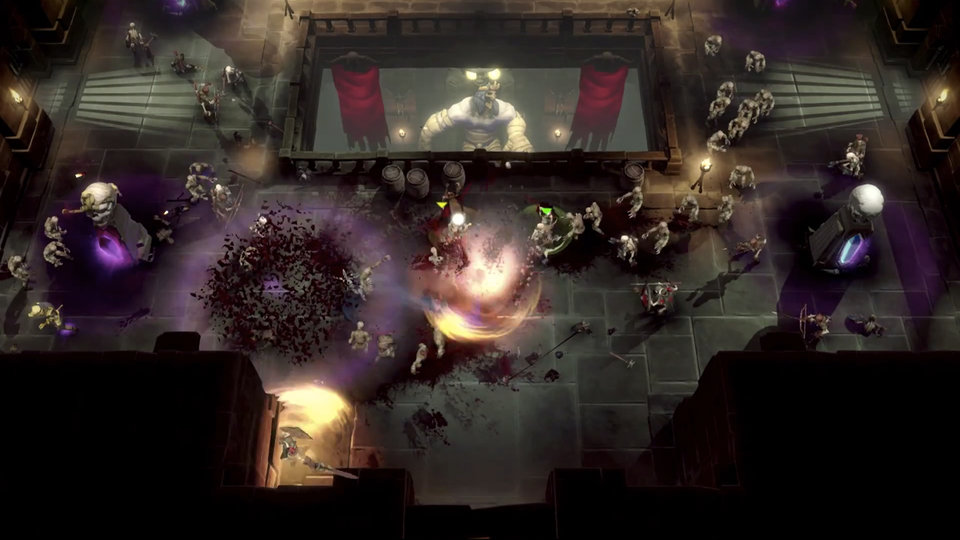 If the food could be shot, I shot it. If it could be ate, I ate it, even if Elf or Valkyrie needed it. Badly. If I had the key, the wall was coming down, before the others could get ready. I did this so many times to my friends in 1985.

Things were different in the original Gauntlet. In the Gauntlet reboot, coming to Linux and PC this September from #WarnerBros. Interactive, you are not completely hosed by a poor food management program. Everyone can respawn so long as one person still is fighting, but there is a 15-second waiting period while they grab all the loot and you do not.

Gauntlet, coming back to Linux and Windows PC in September 3, has a very appealing, modern visual style, and feathers in some really thoughtful special attacks (particularly for Wizard). The fundamentals are still the same — run from room to room, grab all the loot, kill everything that isn’t Warrior, Valkyrie, Wizard or Elf. But the best testimonial to the Gauntlet-icity of Gauntlet is that, sitting on a couch with three strangers at E3, I felt right at home, looting, shooting, scarfing, and apologizing.

Warrior is the only one of the three classes that has no ranged attacks (or a real name), but he has a heavy and spin attack that are very helpful for someone willing to wade into the crowd. Valkyrie (Thyra) is more of a balanced fighter with defensive capabilities, including a dash and a shielded crouch. Elf (Questor), as always, is the fastest but has no close combat skills. He can charge up a shot with his bow by aiming on the right thumbstick.

Most intriguing was Wizard (Merlin), who is asked to mix elements to create a variety of offensive spells, with the elements (fire, ice, electricity). Two elements are combined with buttons and then the spell is cast using the right stick (we played on gamepads; this is a PC game, but I don’t know the corresponding controls). A doubled-up fire spell is going to deal a lot more damage but have a slower rate of fire. A fire/ice mix created a storm of ice shards, lower range but higher repeat.

These are not the only utilities at your disposal. Relics that any class may equip may be found in the dungeon — great, another thing for one to claim and the others to complain. In the playthrough there was a pair of boots that increased speed (the ability was activated with a bumper button.) Other interactive items included exploding barrels you can carry. You will want to position them before you strike (and therefore ignite) them, another lesson Dammit Owen learned the hard way. Explosive barrels are mostly there to bring down crumbling walls and advance you further in the dungeon.

The dungeon will have a limited number of keys, always fewer than the number of locked doors. The implication is that you are never going to get all of the loot a map has to offer. Gauntlet’s dungeons are advertised as procedurally generated but demo is restricted to one level, or that boss levels are necessarily static while ordinary dungeons may change.

The enemies played true to their nearly 30-year old form: weak as one or two, a real bastard in hordes. As Warrior, my job was to get close to the generator and take it apart with spin and heavy attacks pronto. (Special abilities have a short cool-down.) We faced a few sub-bosses, some kind of wraith (nearly all of your enemies appear to be undead) who had a freezing spell that took a small chunk off your life meter but stopped you, well, cold. It was reasonably easy to get around his attack and bring him down with a flurry of axe attacks.

Gauntlet has had many successors since it was introduced in 1985, some of them on modern consoles with more sophisticated gameplay and stories riding on top. This Gauntlet does have a story, but its primary appeal is the same as the original: What will it take to keep you playing? Is another 5 minutes of your time, in 2014, worth 25 cents in in 1985?