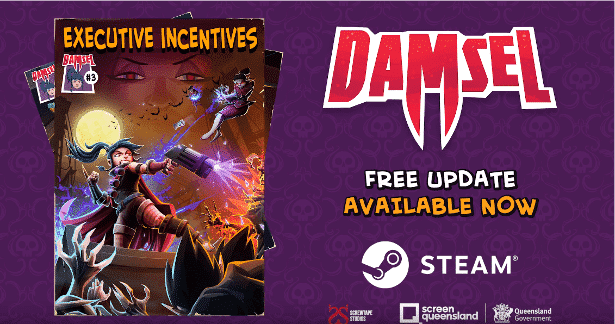 Episode 3: Executive Incentives for Damsel now has support for Linux via Steam games, beside Mac and Windows PC. All thanks to developer Screwtape Studios. Which is also ahead of the projected July 12th release date they outlined via email. After all this is a massive free update for the game.

Damsel is the vampire slaying arcade game. Now we have Linux first for the first free massive update. Available now on Steam. Sadly the only thing missing is the Steam Summer Sale discount, alas. If you don’t already own the game.

Also titled ‘Episode 3: Executive Incentives’. The update adds a coffin load of new content. Since this focuses on the third episode for players to enjoy.
While the investigation of the vampire owned Red Mist Beverage Corporation ramps up. Players will see Damsel facing much larger and challenging locations. Since this ranges from illegal blood farms. All the way up to the intricate halls and basements of ancient castles.

The new Episode 3 content consists of 25 new missions. Which is available across 5 new arenas. Which you can play through the campaign. Or simply unlock via arcade mode.
In between missions the story unwraps through comic panels. Which also brings the dark cartoon world for Damsel to life.

There are also Leaderboards for for each mission in Episode 3. This shows the best score and best times. So hopefully as Linux gamers we beat those NTFS slackers. This includes functions for cross platform and the console versions.

Additionally there is an improvement to the game’s UI. Including changes to the menus. Since this gives a more comic vibe. As well as gameplay adjustments and more bug fixes in Episode 3.

Damsel is available with Episode 3: Executive via Steam. Priced at $16.99 USD. Which also releases with support for Linux. Including Mac and Windows PC, which are already available.