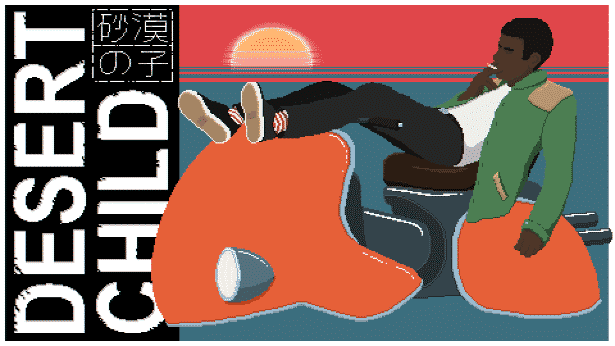 Desert Child the official launch trailer release for Desert Child debuts with support for Linux, Mac and Windows. Thanks to Kinda Funny Games Showcase, the stylistic launch trailer and music track pay homage to the anime Cowboy Bebop. Also created by the sole developer of Desert Child, Oscar Brittain. Since the release is only days away, coming this week on December 11th.


Get Rich, or Die Flyin’
In Desert Child you are broke, but a hoverbike racer with talent. One who also needs to find a way off Earth to get to Mars in order to compete in the Grand Prix. Since this is the greatest race in the universe.
So here is where players will explore a vibrant pixel-art solar system in this stylized racing adventure. Coming with a colorful flavoring of sidequests. And also face fierce hoverbike competitions. Including a chill, lo-fi hip-hop soundtrack.

So the Desert Child soundtrack is indeed groovy and chill. Since Oscar Brittain pays homage to the Cowboy Bebop opening sequence in the official launch trailer for Desert Child. One that will hopefully inspire some epic gameplay. Since you are going to have to face a heap of challenges to earn cash.

Desert Child will be available for $11.99 USD on Linux, Mac and Windows. While the release is coming on December 11, 2018 on Steam, GOG and Humble Store.