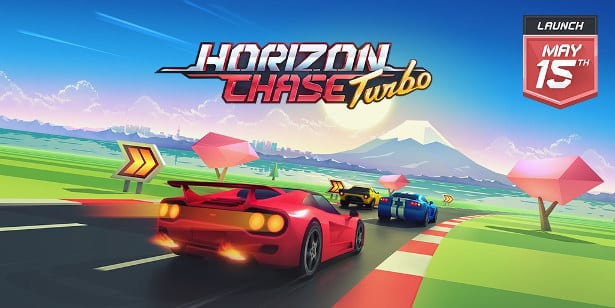 Horizon Chase Turbo introduces an accolades trailer and a decent discount on the Steam Summer Sale for Linux, Mac and Windows.
Since its launch on 15th of May, Horizon Chase Turbo is still receiving very good reviews. Both from the press and players.

So game holds an impressive 96% positive average review score on Steam. Aquiris Game Studio wants to reach out to everybody who enjoyed the game. And also the ones who could be interested in playing it in the future. Share this recognition in a new Accolades Trailer.

Thanks for playing our game and supporting us! The Horizon Chase Turbo team.

Horizon Chase Turbo is standalone homage to classic 16-bit racing games. Those that define both a generation of high-speed and frenetic arcade fun. The simple and tight controls with precision gameplay and detailed depth combine for a nostalgic experience.

Also playable for racing, arcade, retro and multiplayer fans young and old. Horizon Chase Turbo’s head-to-head split screen multiplayer. Along with a catchy contemporary chiptune-style music. All of which adds to the game’s painterly aesthetic and competitive action.

“We created Horizon Chase Turbo to be the racing game we wanted to play. While hitting the sweet spot between true-to-life simulators and chaotic, explosive kart racers,” said Aquiris Studio Game Designer, Felipe Dal Molin. “With Horizon Chase Turbo, we want players to feel the nostalgic tension of the simple tug-of-war of a tight turn. Where players are run off-road for a split second only to return to intense high-speed action. While they overtake and battle against friends playing together on the couch or via the online ghost mode.”

Aside from the modernly retro graphics, the split-screen couch multiplayer modes are among Turbo’s most defining features. All game modes, including the World Tour campaign, tournament and endurance challenges. Also support local split screen multiplayer up to four players.

So racers can compete in head-to-head races one at a time. Or spend hours racing around the globe collecting coins. While working to achieve the common goal of unlocking exotic vehicles and spine tingling tracks.

Turbo’s classic arcade gameplay and simple mechanics make the game easy to pick up and play. While the simple and intuitive controls require the use of only three buttons.

Horizon Chase Turbo is 20% off during Steam Summer Sale. The game is also available for $15.99 USD right now on Linux, Mac and Windows.