#Valve has #announced today that Steam’s user base has grown to reach over 100 million active accounts. 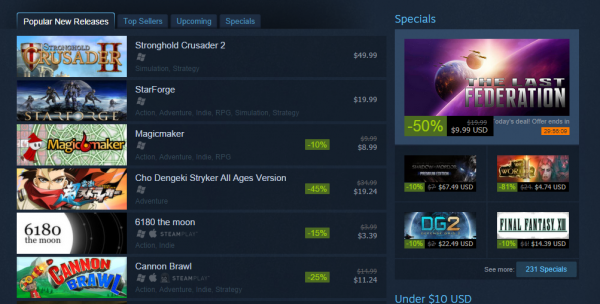 Valve Software today announced a move for its Steam platform that the vast majority of PC game devs have been waiting a very long time for — Steam Discovery, an update to the store that introduces new #curation options.

Valve’s Alden Kroll says that the move is in direct response to the fact that over 1,300 games have been released on Steam already this year. In total, Steam hosts over 3,700 games and counting. A recent survey showed that nearly 75 percent of developers polled think platform holders must do more to improve discoverability.

With Steam Discovery, Steam’s 100 million active users can now become “Curators,” and build their own lists of games that they believe their followers should pick up.

There’s also other new functionality and features in place — the Steam storefront will now show recommendations based on past purchases and what your friends are playing, while a new “Discovery Queue” will allow you to browse through new releases quickly, and “follow” any game that looks interesting, but you aren’t ready to purchase just yet.

“This is really about improving discoverability for customers as the number of games available on Steam continues to grow at a very rapid rate,” Kroll said today. “In the past nine months, over 1,300 games have been added to Steam, and we don’t see that pace slowing. This is part of an ongoing effort to help customers find the titles they’re most interested in playing and connecting them with communities and titles most relevant to their tastes.”

But what does this new storefront mean for developers? Valve is providing a new analytics toolset alongside this new functionality, and Kroll says devs should benefit from having their games shown off to the most relevant customers.

“In terms of the analytics, the goal is to provide developers with insight about just how many potential customers their game is being exposed to and where,” he explains.

“In addition to showing developers the ways that customers are finding their product within Steam, the analytics also include information about external sources of traffic, which will help track external marketing efforts. We have done a lot of testing on this new system and the analytics to make sure it produces a higher number of impressions for games, and a more relevant service for showing those impressions. Like everything else we do, wider scale testing will teach us a lot and may inspire a few tweaks along the way.”

Valve is also well aware that the current “New Releases” and “Top Sellers” tabs aren’t as useful as they once were. As a result, the company is bumping these tabs down the front page, in favor of these new discoverability options.

“While those lists are still there, the new personalized home page can better serve customers by including titles of interest that may not be the most broadly popular titles,” says Kroll. “Niche titles can now appear to appropriate customers in the largest banner on the home page. Steam Curators you follow may now recommend popular games from last year that you might have missed, or that awesome hardcore strategy game that just released.”

“Developers can set up their own Steam Curator space if they wish,” Kroll answers. “We expect some developers will do this to promote their full line of titles or even to promote the other games that they enjoy playing themselves.”